Jalan Bahar Clay Studios (JBCS), which began operation in 2005, is managed by Focus Ceramic Services. Located next to the CleanTech Park, in the premises of Guan Huat Dragon Kiln, JBCS is a unique place where Singapore’s pottery heritage has found a new life in a community of artists working with clay.

In 2001, the (Guan Huat) Dragon Kiln was saved through a joint effort. The Singapore Tourism Board financed and project-managed the restoration of the kiln and roof, the then Ministry of Information & the Arts secured the title deed, and URA gave approval for the site as a pottery park-cum-arts education centre. Other participants were National Heritage Board, the then Land Office, and Nanyang Academy of Fine Arts

In the initial years, Singapore’s Master Potter Iskandar Jalil and his students, Jason Lim and the Tanjong Pagar Community Club group worked at JBCS. It soon grew into a vibrant community of potters and ceramic artists. Other renowned artists such as Jessie Lim, Delia Pravacki and Yeo Chee Kiong have also worked at JBCS. Many continue to use the space for special projects. 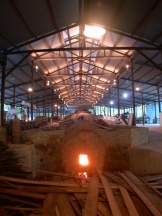 The Guan Huat Dragon Kiln still survives and is fired occasionally by wood firing enthusiasts from various pottery groups in Singapore as well as from JBCS. The studio space and facilities at JBCS provides potters and ceramists of Singapore, the opportunity to work and access to a range of firing methods – pit firing, raku firing, gas and electric kiln firing and of course the dragon kiln firing. It also accommodates large groups of school children, senior citizens and anyone interested in getting acquainted with the craft of pottery.